Have you ever experienced The Pharisee Factor? This factor is negative and it can destroy relationships before they even start. A Pharisee is someone who looks down on another because that person doesn’t meet their particular standards. I was hit by it the other day and it almost destroyed a friendship that was just beginning.

I had been chatting with a gal and after a few days realized that perhaps she worked in the sex industry. When I realized it, I wanted to reject her and not speak to her again. Boom! I had been hit by The Pharisee Factor. Fortunately for me, after a few minutes of that thinking, The Holy Spirit began to convict me of my attitude. He made me realize that I was acting like a Pharisee and that my attitude stank. I was judging her and somewhere deep inside of me, I had forgotten about my own sins.

I repented of my bad attitude and began to feel compassion for the woman. For whatever reason, she was involved in a lifestyle that had to be very negative for her. I began to pray for her and am hoping for an opportunity to share the love of the Lord with her. I suspect that before that happens though, I must look at my own life, my own heart, and pray that the Lord will give me a heart like his.

When we read about Jesus in the Bible, we see that He always reached out to those who were lost. When the Pharisees would criticize Him for the company He kept, He would always remind them of why He came to the earth. He would tell them He came “to seek and save the lost.” He would say that “the well have no need of a physician.” He had a heart for those who were hurting and He wasn’t going to let other people’s opinions stand in His way from reaching out to those that needed Him.

Have you been hit by The Pharisee Factor? Do you sometimes reject people for the way they live and the things they do? Do you need a heart of compassion in order to reach out to them and offer help? If so, don’t be afraid to come to the Lord and ask Him to give you a heart like His. If we want to reach those who are lost and hurting, we must be more like Him and less like a Pharisee. 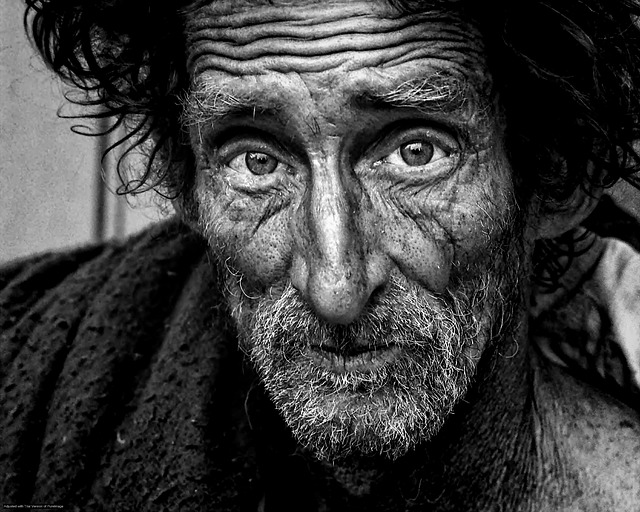 Several years ago, I was standing at the pharmacy counter waiting for my son’s prescription. For two years, he had been suffering from a migraine pain syndrome set off by a fall on a gym floor. We had been to doctors, neurologists, and a vascular specialist who told us our son had the worst kind of migraines. Nothing we tried seemed to give him relief for any period of time. So there I was, buying yet another prescription that may or may not help. I was feeling sorry for myself because I was putting out more money that was probably being spent in vain that could have been used for something else. As I was spiraling down in the quietness of my own thoughts, I just happened to look out the window.

There in front of me was a middle-aged man walking by. He was obviously going to the railroad tracks behind the pharmacy hoping to catch a train. He was carrying a backpack as he moved along. Then…he looked up and I saw him…really saw him. He had the saddest eyes I had ever seen. They were filled with pain and suffering and bore deep into my soul. At that moment, I knew I was looking into the eyes of Christ. There, in that man was true suffering. I was immediately taken aback and felt ashamed. I, who had so much, was feeling sorry for myself and just outside the window was a man who had nothing but the clothes on his back. I will never forget his face or those eyes that bored into my soul. To this day, I will never know if that was an actual man or a manifestation of the Lord on earth.

I do know that in his eyes, I had seen the Lord. He was not walking the hallowed halls of government power or sitting in a plush corporate boardroom. He was there with the lowly, the suffering, and the homeless. I know now that if I want to be where the heart of God is, that I must go where the broken-hearted are. That’s where He will be, ministering his love and grace to those who have no hope and need His help.

“The Lord is near to those who have a broken heart, and saves such as have a contrite spirit.” Psalm 34:18